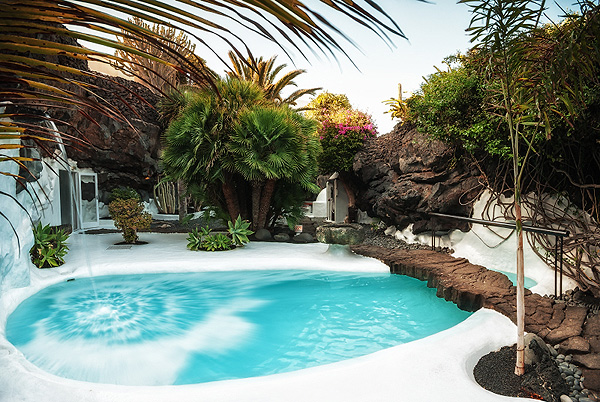 The complex that presently constitutes Fundación César Manrique’s HQ was once the artist’s home (now a museum open to visitors), with its service quarters and a garage, all sited at Taro de Tahíche. These areas were recycled by the artist himself to house the museum and its administrative and service infrastructures.

The foundation’s main offices are located alongside the museum in the former service quarters, reconditioned prior to the creation of FCM.

The service area (bar and shop) occupy the former garage.

In 1988, César Manrique moved from Taro de Tahíche to Haría. There he built a home over the ruins of a former rural manor located on an estate measuring 11 261 m², reconditioned and remodelled by the artist in keeping with the island’s vernacular architecture. He kept some walls and materials, but true to his hybrid approach, he also included a few modern elements, such as a bathroom, in which he applied his original vision of that functional space along the lines of ideas implemented at Taro de Tahíche.

With its square floor plan surrounded by a generously sized palm grove, the house originally had two inner courtyards, a balcony, three bedrooms, two bathrooms, two small sitting rooms, a kitchen and a living room with a stone hearth. Manrique used stone and wood profusely as his core materials.

The typology, space and personality of this second home differ substantially from the atmosphere prevailing at Taro de Tahíche. More private, cosier and conventional, set in a former palm grove, the Haría home stands as proof of the artist’s personality in its good taste, allusions to traditional architecture and subtle interaction with the historic and natural environment, eschewing any dramatic effect. He recycled materials and used objects devoid of context, exhibited merely for their aesthetic value.

He also annexed an apartment to the main building for his service personnel. The enlargement undertaken in 1992 was left unfinished upon his death.

The estate had two structures detached from the main building: a garage and a large, half-buried studio.

Pursuant to its policy of enhancing the institution’s infrastructure, FCM has purchased an estate and respective manor house adjacent to its headquarters. The house, which will be refurbished, has been enlarged with a new-build structure intended as a studio. The complex will serve as a workspace for artists and creators participating in FCM’s Resident Artists programme. The studio will also be used for educational and cultural purposes to supplement the foundation’s present facilities.

The 434 m² studio, authored by Palerm & Tabares de Nava architects, has been carefully designed to harmonise with the specific nature of the site.

José Saramago Hall is sited at Plaza de la Constitución in Arrecife, capital city of Lanzarote. This building houses a César Manrique reading and research area and rooms for cultural activities and encounters.

Its 205 m² are fitted with environmental control as well as audio, visual and lighting services.

It opened on 24 November 2007 on the occasion of the exhibition ‘José Saramago: the consistency of dreams’, attended by José Saramago in person as well as Spain’s erstwhile Minister of Culture, César Antonio Molina.